The Sabres (TS), also known as The Sabre Clan was a clan founded by Star Sabre and Moon Sabre in 1999, within the Jagex game Cyber Wars. TS was one of only two clans known to have existed prior to the release of RuneScape (the other being 'The' Clan), making them the first and oldest clan of RuneScape.[1] Reknowned for their Honour and ARPK stances, TS and the Wilderness Guardians shared three alliances over the course of their history. 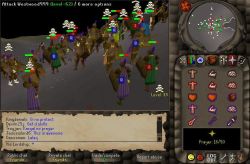 Only a few hours after WG's formation on 6 December 2003, Mortus Sabre posted a reply to the clan's recruitment topic on the Rune Village fansite's forums. His Lordship remembers it to be similar to:

Finally, a clan with morals. You have the support of the Sabres.

Unsure what the post implied, His Lordship took the opportunity to request an alliance. TS became WG's first ally on 9 December 2003. WG would also subsequently join The Federation, a syndicate of clans (including TS) which shared similar principles of Honour and ARPKing.

The first alliance lasted until sometime in late 2004, when an internal crisis led to TS ending all alliances, including WG's. However, TS did take part in a bronze war with WG and The Synergy prior to WG's first Anniversary. They also fought in a five-way iron war on day 7 of the Anniversary itself, alongside WG, Syn, Fear, and the Legends Legion.[2]

In early 2005, WG approached TS again requesting a new alliance, and the proposal was accepted.[3] In mid-2005, The Federation was restarted by six major ARPK clans, including WG and TS. However, WG left the Federation around late 2005, but retained its alliances with TS and The Synergy.

Not much else is recorded in WG's written history concerning the second alliance with TS. However, it is known that the alliance was broken once again in 2006. According to His Lordship, Kira Sabre/Sneak Sabre ended the alliance after months of attempting to do so. Kira has denied this.[4] 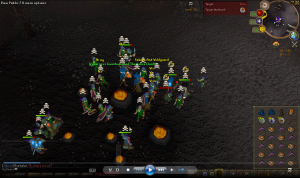 WG and TS clear NI while sustaining no casualties, 6 December 2009.

On 10 November 2009, TS leader Sabre Chilli approached WG for a third alliance, and the proposal was accepted by WG Council member Darth Magul on 13 November. The third alliance lasted for around three years, and was considered the most fruitful and beneficial out of all of WG's alliances.

On 22 November 2009, TS asked WG to AC for a PvP war, which was crashed by a dishonourable clan, Noobs Incorporated. Several days later on 6 December (WG's Anniversary), WG and TS hosted an allied raid and encountered NI. The allying clans went on to clear NI twice throughout the night, and sustained no casualities in either of the engagements.[5] Subsequently, allied raids under the moniker "WS" or "SG" became a weekly occurence, along with WG's junior clan Descendant Guardians. These were often considered the most successful out of all of WG's raids at the time.

The last recorded and significant PvP event involving TS was a bronze war against DG on 6 November 2011, which DG won.[6] TS's activity within RuneScape began to diminish over the course of 2012 and 2013, though the clan had no official date of closure[7], and thus the alliance was never officially "terminated". However, the clan's community remained active for several years afterwards, and two former leaders (Ganja Sabre[8] and Sabre Chilli[9], the latter of which was the last official leader of TS) later applied to and were accepted into WG. 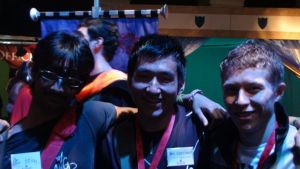 During the third alliance, several members of each clan would attend a real life event hosted by the other clan. Vio, a former Sabre who left and joined WG in 2009, attended both of TS's first real life meetings on 14 August and 6 November 2010 (as WG Keanu). Sean Sabre of TS and an emissary to WG attended Runefest 2010 with the clan, and was featured in several iconic photos of the clan while wearing a WG t-shirt, despite not being a member of the clan. TS Leader Sabre Chilli attended Runefest 2011 with WG the following year.