RuneScape Classic, or RSC, was the first available version of RuneScape. The Wilderness Guardians was founded in RuneScape Classic on December 6th, 2003 by His Lordship, after he was PKed while collecting runes at the Dark Warriors' Fortress. 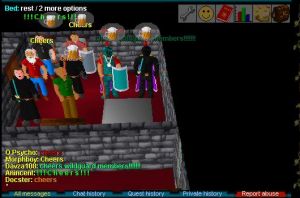 The oldest surviving picture of the Wilderness Guardians, showing an event from December 2003

Whilst playing RSC, Lordship decided to start an anti-PKing clan originally called the "PK PKs", before changing the name to the Wilderness Guardians. Originally an anti-PK clan, WG eventually adopted an ARPK (Anti-Random Player Killing) code, where they would only attack other PKers (identified with a skull), and protect PvMers, skillers and other "innocents" in the Wilderness on ARPKing trips called "raids". The clan developed their motto based on this principle - "We are the Shield of the Innocent", and gained the support of other ARPK clans including The Sabres (RuneScape's first clan). With the creation of RuneScape 2 in 2004, WG decided to leave RSC.