The Wilderness Guardians vs Black Dragons (WG vs BD) was a war that took place on 7 January 2006. It was WG's second planned P2P war, following WG vs Dead on Arrival the previous year, and WG's victory is considered to have resulted in the clan being subsequently ranked within the top 5 P2P clans.

As a result of widespread fame stemming from WG vs DoA, several clans offered proposals for P2P wars to WG, including the Black Dragons in December 2005. WG accepted the proposal, and the battle was scheduled to take place in January. WG was on a downturn at the time, having lost at least five separate fights in F2P, and were in desperate need of a win to break their losing streak.

Several issues arose prior to the war, one of which was His Lordship temporarily resigning from the clan. During the new year celebrations, he became intoxicated and left WG in a state of rage - returning the next day, but causing a few other WG members to also leave permanently.

His Lordship produced a ~13-minute War preparation video for WG members, which included all of the fight details as well as extensive battle plans and strategies. Unfortunately the video was leaked to BD, allowing them to develop a counterplan. The video also found its way into the hands of a dishonourable clan, Scum, who intended to crash the fight. WG requested an anticrash from their allies Fear, but they were unable to attend. WG then approached two other clans, Divine Forces and Valour, who were both known for their strong commitment to the Honour code. Both clans agreed to AC the fight. 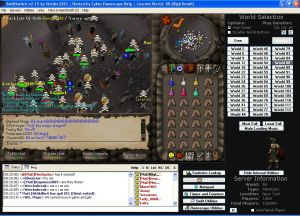 A screenshot of a SwiftSwitch client. WG and BD battle at Annakarl, and Scum is mentioned in WG's IRC channel.

The war took place on 7 January 2006. WG massed at Juliet's House in Varrock, as they did against DoA, on world 54. The fight occured at Annakarl, and spread out considerably towards the east. Based on footage from the battle, it appears WG again chose to utilise the battle tactic of dividing into separate groups. Though BD were expected to bring team-49 capes, a large portion of the opposing clan seemed to be wearing plain black capes instead. This was possibly a direct result of the leaked battle plans, though it put BD at a significant disadvantage as they could not left-click attack without the risk of friendly fire.

The fight lasted for well over 40 minutes, which was considered at the time to be one of the longest P2P wars in RuneScape history at the time). DF and Valour successfully protected the fight for the entire duration - the details regarding Scum's appearance are unclear, but they do not seem to have managed to interfere with the main battle.

At the end of the war, BD had been completely cleared from the battlefield and WG remained with approximately 30 surviving members and some spectators. Complications arose when trying to officially determine the victor due to the considerable amount of issues prior to the fight, as well as a large amount of spectators and clan members returning after death to watch. Eventually, WG was declared the victor.

Footage of the battle was recorded by Tumpelo and made into a ~10 minute video. It is not known how this video was initially distributed, but it was added to the official WG YouTube channel in 2018.

It is commonly believed that defeating the Black Dragons resulted in WG being ranked within the top 5 P2P clans, and 2006 saw the clan continue to pursue P2P PvP even more intensely.